skip to main | skip to sidebar

Ok, this about tops it for prop research projects!  Bugs!  Bugs that would land smooshed on the front grill of a car.   I haven't really paid much attention to the kinds of bugs that meet such a fate, but I would now become an expert on the topic.

My husband and son were taking a road trip from LA to San Francisco and I thought this would provide the perfect test vehicle.  Wrong!  November is not a buggy time of year.  Only one bug had smeared across the grill of their car in a round trip!  Amazing in itself!

Are there machines that shoot bugs onto cars for movies?  Yes, there are!  What velocity would you like?  Special effects shops have machines which suck up whatever is put at one end and shoot it out the other end.  The question then becomes, how do I get thousands of little tiny bugs to use as ammunition?  It they are dead are they juicy enough to stick to the grill.  If they are alive how does one catch enough bugs and isolate them, to shoot them through a bug gun?  And once they shoot through, will they stick?  Do we need spray adhesive?  With a job such as this, there are many problems to be solved!

It turns out there is a book published called That Gunk On Your Car, A Unique Guide to the Insects of North America.  http://www.amazon.com/That-Gunk-Your-Car-Insects/dp/089815961X.  A perfect resource!

As one telephone call lead to another I found that buggie people stick together.  A professor of agriculture at a nearby college had a fiance who's father collects, catalogs, and author's books about insects.

I also found a source used by universities, schools, extension offices and museums for documenting and displaying insects.  They have every for filing, mounting, and procuring insects.  They even have the insects, however dead.  A product they sell brings insects back to a subtle state!

"Cut to the kill"!, the fiance's father was hired to gather small insects at night with a bright light to attract them.  He came back with a handsome selection that was put in alcohol and then selectively smashed  on the grill of a car.  Mission accomplished! 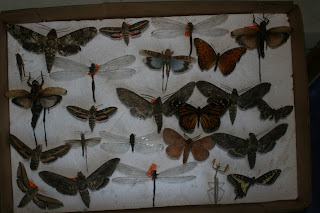 Posted by StylinSteph at 9:59 PM

StylinSteph
Los Angeles, CA
Stephanie is a commercial advertising wardrobe stylist based in Los Angeles. Bringing the wardrobe and props together for a still photo shoot or commercial is a BIG and FUN job. Enjoy the adventure!